My bordello by the sea

An exclusive interview with Über Fuhrer Karl Renz
(Kevinanda and Karl go toe-to-toe and slug it out for 15 rounds!)
KEVJI: Karl, many people think you are a self-satisfied twat. How do you respond to these accusations?
KARL: You are an unenlightened asschlock, not fit to lick my jackboots.


KEVJI: Karl, you seem to be surrounded by young women called Noi, Nong, Lec and Nok. Is it true that they say you are a big boy when you give them lots of monies?
KARL: I am a big boy in the world of Neo Advaita!


KEVJI: The burning question in the sewers of Tiruvannamalai is why have you forsaken your sycophants in favour of the fleshpots of south Thailand?
KARL: I am bored with these lame fuckwits and I have also been gazumped by that sleazy fat rastafarian!


KEVJI: Do you shop at Tesco in Koh Samui and is it an improvement on the Rip Off Supermarket?
KARL: I prefer Carrefour, it's the place where the real Eurotrash hang out!


KEVJI: Is it true you and Radha have run off together? Because she hasn't been seen recently, after the loss of most of her devotees caught up in her latest real estate scam.
KARL: I am only interested in what is prior!


KEVJI: What, foreplay? Or is it her voluptuous and perfectly formed breasts?
KARL: Ja, to all of the above.


KEV: Do you have any advice about the tragic demise of that much esteemed guru Nithyananda?
KARL: Less of the crocodile and more of the bullshit.


KEVJI: Did you know that Satsang Barbie has volunteered to fill your Xmas and New Year spot? Do you think she has the necessary integrity?
KARL: (We pause while Karl vomits into the nearest container!)


KEVJI: Is it true that Germany failed to reach the World Cup final because of an excessive number of homosexuals in the team?
KARL: Only those who are beyond gender reach the final goal!


KEVJI: Were you shocked to hear that your old stomping ground, Usha's restaurant is about to be turned into a supermarket?
KARL: At least I won't be poisoned by that extortionate buffet.


KEVJI: Have you replaced your Blofeld Bond villain sneer, now that you are loved up in Samui?
KARL: I still stroke my big white cat vigorously.
And on this happy note we leave Karl slurping on his tequila sunrise, shimmering in his newly acquired and very garish Hawaiian shirt ...
Another day in paradise ... Or is it a prelude to his triumphant return? 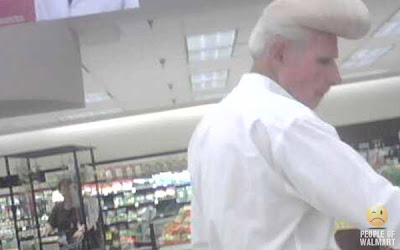 Is that a new guru just arriving in town? Looks like he's heading straight for those Auro-vile munchie bars just near the check out at the Ramana Rip off Supermarket. What is he doing here at this time of year, the real weirdos only come at Christmas with lump-of-lard Mooji and his Goan refugees. Maybe he escaped from a 1950s' sci-fi movie and just got lost, or is a more sinister plot afoot? (World domination, genocide, lots of shopping and all the usual bullshit!) Our intrepid investigative reporter approached Dead Elvis to try and cull a quote from this man of mystery. But all he could do was mumble: "Viva Las Vegas!" Is it a mantra? Will busloads of whackjobs with poodles on their heads invade Tiru?

We await events with baited breath but our suspicion is that the End Time has begun and it's gonna get really weird!