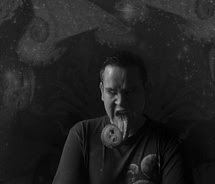 Chi-Ting Apocalypse brings you an incendiary expose on a vipers' nest of conspiracy in the very heart of our beloved Tiruvannamalai ...

Many outwardly pious and respectable members of our community have been gathering each month on the night of the black moon at the Bose compound on the Chengam Road to secretly attend the H.P. Lovecraft society, otherwise known as Club Cthulhu. Their demonic mantra is: "ph'nglui mglw'nafh Cthulhu R'lyeh wgah'nagl fhtagn" and the echoes of black tantra and blood-curdling screams are heard long into the night.

Our informant is a man in his mid-sixties, famed and revered as a mystic poet of the Karl Renz school of mouthing-off. His face is pale and sallow. His jowls quiver like a Christmas turkey and his hands have an uncontrollable tremor. He whispers:

"You have no idea of the diabolical deeds they are capable of. They are soul-sucking vampires in league with dimensions beyond mortal knowledge."

"Everyone is involved, it's truly shocking. Everyone! Mahalaxmi (Byron Bay psycho-sister) is their high priestess, Steve Ibn Al Haq her consort, Chandi Devi (Papaji Policewoman) and Shivani carry out the sacrifices. How do you think Chaitanya lost his mind?"

"All the time. That's how all the local dogs get fed. There are body-parts flying everywhere. Divakaran at the Rip Off Supermarket is doing a roaring trade in Sweeney Todd pies. The rickshaw drivers love them!"

Who else is involved?

"Nearly everyone. All the big names: Mooji, Nithyananda, Premananda (Spermananda). All the local businessmen. The corruption goes from top to bottom."

"His name in the brotherhood is Beelzebub Baba. He is the Lord of the Flies."

"He has been taken over by a faecal shit-eating demon. He carries out monstrous perversions on the corpses of the freshly sacrificed. He is big into necrophilia."

And Nithy, dare I ask?

"His depravities are so gross that words fail me!"

There are rumours of a 9th dimensional demon, lurking in the pit beneath Manna Cafe. Can you confirm this?

"They have been summoning her. She is the one foretold. Many will die to bring her back through the portal. All of our world will be laid to waste."

You don't mean The Return of Sunanda Whitehouse?!!

"They are collecting host bodies so that the Moral Majesty that is Sunanda may return to our dimension and wreak vengeance on the unbelievers."

Where will you go now?

"I will leave this place but the horror will never leave my heart!"

At this moment, the unfortunate poet releases an incontinent stream of yellow fluid, that forms into a steaming puddle on the floor by his feet. He starts to speak in tongues as his bulky body lapses into contorted spasm. The smell of palpable putrefaction in his faux Auroville-style slum becomes nauseous - even to the hardened stomachs of the Chi-Ting interview team - who promptly leave the scene. YOU HAVE BEEN WARNED ...