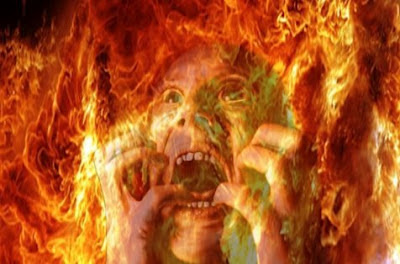 If personal dominion is your game, Tiruvannamalai can be hell on earth because there is nowhere to hide from yourself ...

Sometimes Tiru resembles a carnival of the grotesque: all those nasty vasanas bubbling to the surface like rampant acne. This is the place where all the poison in the mud hatches out! Dozens of Westerners have been deported back to their countries in various psychotic states. Deranged devotees have been sent here by Osho and Papaji, creating the social toilet which feeds Mooji, Spermananda and their ilk. Not long ago an Australian woman lost her leg outside the Ramanashramam and strange accidents abound on the Pradakshina Road.

Recent history is also littered with bizarre deaths, a kind of gothic Danse Macabre from a masked Venetian ball. Radha's spectacular self-immolation is but one of the more shocking examples. Does anyone remember the Austrian woman whose burnt corpse was found in 2005 - or the Italian who headbutted himself to death in the Pink House? Then there is the French sadhu clad in only a loincloth who died of septicaemia, having refused all offers of medical help. In a ghoulish imitation of Ramana's famous maxim, he died of Advaitic fixation incessantly mumbling: "I am not the mind, I am not the body." Only recently the Ganapati librarian was killed in a traffic accident after decades in Tiru. It doesn't matter how pure or honourable your seva is here, if it is your prarabdha karma and your time is up, the long hand of fate will reel you in!

Arunachala is an energetic invitation to a different realm of being where the "I" has fled the stage. If that invitation is rejected there can be hell to pay! Arthur C. Clarke based the monolith in 2001: A Space Odyssey (and the later Kubrick movie) on Arunachala. (There are even extant letters to a deceased member of the community who knew him that prove it!) He considered the hill an evolutionary accelerant to a new way of being, the portal of the star child. Others regard Arunachala as Lord Shiva himself in the form of a pillar of fire (tejolinga). Neo Advaita Kingpin Karl Renz says that Arunachala is a nuclear reactor of cosmic proportions. He has explained his rationale by the high occurrence of cancer in Tiru - he even used Ramana's demise to illustrate the point. All this goes to show that this is not a place to pussyfoot around. This is the Mayan Ball Game - a game for keeps - and if you lose, your heart will end up on the sacrificial altar! Those who dally with spiritual affectation burn up like a moth in a flame and hurtle to the ground at high velocity. Just like Icarus as he went SPLATT!

And now we come to the moral fable of that bumptious clown, Richard Clarke, a ridiculous Dickensian figure straight from the pages of the Pickwick Papers. The spawn of some idiot Californian guru called Nome (who no-one has ever heard of!), R.C. rolled up in Tiru a few years ago and saw fit to appoint himself Protector of the Public Good. His latest debacle has seen him attempt to make his own alternative inner path, in effect immortalising himself and making a monument for his own greater glory. Now his compulsive meddling has caused the inner path to be closed by order of the District Forest Office. The Hindu cites the official reason for this as being that the path passes through reserve forest. Entering is an offence and yet there have been repeated incidents of forest fire. This is because it is believed by some to be spiritually meritorious to ignite fires on Arunachala.

The fact of the matter is that these fires are being started by locals, not pilgrims performing pradakshina. But this is irrelevant. Indian bureaucrats have been riled by Clarke's neo-colonial presumptions and have simply reacted in a predictable manner. The end result is that everyone is paying the price for R.C.'s hubris and self-aggrandisement ...

Richard Clarke's world of "nice" and "good works" is a direct product of the disturbed medieval Christian mindset and its belief in eternal damnation. Remission of temporal sin was only obtained through punishment and arduous penance. Dante's Divine Comedy for example, describes the soul's allegorical journey towards God through Inferno, Purgatorio and Paradiso where hell is located within the Earth complete with nine circles of suffering. Clarke is a jumped-up fool who thinks he can earn his place in heaven by righteous conduct. He has put himself at the top of the pile and believes he has a moral mandate to tell everyone what to do. His attempts at opening the inner path for the masses have proved utterly counterproductive. A wannabe politician, he has an emotional need to be loved for his many benevolent deeds in the name of the community. To some it all seems very innocent: but in the shadow of Arunachala, the drama of the ego is always revealed. The lingam of fire relentlessly turns up the heat and exposes the cankerous sores of spiritual pride and personal ambition.

Richard ... The road to hell is paved with (so-called) good intentions. You may find yourself sharing quarters with pederast Popes and other perverse creatures in a fiery place from which there is no escape ... Only endless aeons of agony and atonement. As the inscription said when Dante passed through the gate into the inferno: "Abandon all hope, ye who enter here."