The lull before the storm 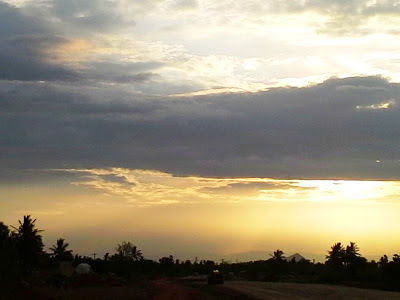 It's been a long, hot summer. Brains have been boiled and many hardcore Tiru-ites have collapsed into a permanent state of delirium ...

So it is with trepidation that we report dark rumours that our favourite pet monster, Mooji, may be returning to Tiru. The Rice Mill, scene of his previous visitations, has been refitted and freshly painted. Have Mooji's cronies paid for this refurbishment and will the Lumpy Leviathan be returning to our shores? The last year has been blissfully idyllic without him and his avaricious plague of locusts (or errr ... "devotees" depending on your level of delusion!) Unfortunately it's only been a temporary remission from a fatal disease: Mooji is a parasite who will return with greater virulence to kill its host. No one who lives in Tiru wants him to come back and top of the list of disapproval are the bigwigs at Ramana Ashram. But for Mooji, his attempt to appropriate Ramana's legacy and lineage is what gives him legitimacy. His is a dubious addiction that covers up his profound absence of authenticity and originality. The bottom line is that Tony Moo ain't got no soul!

And then we come to that harbinger of hell, the bypass, which is apparently a done deal and will be finished by Deepam (as predicted by local astrologer, Richard Clarke). Fat chance! - but it will come soon enough, bringing congestion, pollution and more building, which will place greater stress on the infrastructure and resources of the area. Projects like this never resolve the inherent problems. They only inflame them and make the core issues worse. The new road will make Tiruvannamalai bigger, open to more visitors and traffic, further ravaging the landscape and bringing environmental destruction and mayhem in its wake. As it is, at night machinery can be heard grinding away as construction workers illegally plunder the bedrock in the neighbourhoods alongside the road. They have ravaged the plain around the Lake: every morning yet more massive holes appear that have been gouged out of the ground. The area has become a pockmarked abomination, which until only very recently, was a wide expanse of pastureland for the local goat herders. The company overseeing Project NH-66 is Transstroy, which local wags have taken delight in renaming, De-stroy, in homage to the great Johnny Rotten.

The Tiruvannamalai section of the ring road encircles the south side of the town - stretching from the Vellore Road in the north to the Bangalore Road in the west. Easier access to the town promises huge development opportunities. Carloads of Indian real estate prospectors have been seen sizing up the back field due east of the Bund where plots have been pegged out since plans for the bypass were first announced. Unlike Adiannamalai on the west side, where there has already been a huge amount of building, the south side of the mountain remains relatively undisturbed. With the advent of the road, a whole new suburb will spring up. Ideally positioned for direct access to Ramana Nagar and the Ashram area, the mud track alongside the Lake has already been widened and compacted. But there is a problem. No water. The place is drying up and we have been told that in only 5 to 10 years, the whole of Tiru will be a desert. Already a victim of the ongoing Kaveri River water dispute with Karnataka state, this month the Cauvery Panel rejected Tamil Nadu's latest demand for water because of the shortage of inflows after last year's almost non-existent winter monsoon. Rain-bearing winds meant to hit the Indian subcontinent every year between May and September (the summer monsoon) and between October and November (the winter monsoon) are bringing progressively less precipitation to Tiruvannamalai ...

This summer for example, locals in the Lake area have been desperately contracting borehole companies to come to their plot to search for more water because their wells have dried up. All to no avail. Multiple test points have yielded nothing and early morning, villagers are forced to bicycle water in huge plastic containers to their houses from further away. Once again the Lake itself has disappeared (up to 2009 everyone was happily swimming in it and catching leptospirosis from the rat urine!) and locals recall how only 30 years ago, they were able to catch eels in the marshland near the soap factory (now designated Paurnami Nagar-II). Local floral fetishist and author David Godman (otherwise known as Godot) residing due south of the Lake has no longer being able to drench his exotic botanical garden because his compound is running dry. Houses at the back of Ramana Nagar close to the Perumbakkam Road have had no water at all for the second year in a row. In both May and June, long lines of women were observed queueing up at the standpipe near the Animal Shelter having walked in from their villages to meet basic drinking and cooking needs. And perhaps most prophetic of all, this season the well at Ramana Ashram filled to the lowest level ever seen.

Local government officials have made assurances to those eager to invest in bricks and mortar here, that water can easily be brought in by tanker. (You can just imagine the chaotic dogfight that's going to break out over the ever-spiralling prices!) The last ten years have seen an unprecedented real-estate boom that has spread like a virus across all areas of India. It's a global phenomenon that has finally brought rapid urbanisation to our dusty temple town and pushed land prices through the roof. The most grotesque example of this morality tale was the suicide of Radha Ma after Vijay of Dreaming Tree fame exposed her fraudulent land deals. Speculators know that if they buy the plots situated close to the bypass now, later they will be able to sell them on to property developers at vastly inflated prices. But it is actually the Indian middle classes from Chennai and Bangalore (many of them Arunachala devotees) who are coming en masse to Tiruvannamalai. They are looking for cheaper land than in the cities for their retirement or a second home. Meanwhile despite the noise and pollution, the Tamil families already living close to the new road are pleased, because the value of their house will rise. The logic of capitalism is more production and more consumption, but we live in a world of finite resources. In T.V.Malai the basic fact is that water is running out. No water; no life. End of story!

Until that moment dawns, every willing shark will try and screw the last shekel out of a game that will inevitably go bust. The sad thing is that no one has an economic Plan B and only catastrophe will force change. As usual our glorious leaders are drunk at the wheel. It's a pyramid of corruption where everyone has their hand in the cookie jar and they will continue looting the store until the lights go out. All that will be left is desolation and a wasteland. It is indeed a strange and savage irony that so many who come to pay homage to a simple man clad only in a loincloth (Ramana Maharshi) end up building temples to their own egos and feeding a cycle of greed. In Mooji's case, it is the adulation of his gullible and naive congregation that he needs for his fix. For others it is the actual buildings of sand, cement and high fashion design. But if you're a simple sadhak, do you really need to spend endless lakhs constructing a fantasy home, all for a premium view of Arunachala? And is Tiru really the best venue for an economic diaspora from India's urban centres, merely in search of investment opportunities?

Everybody assumes that it is the spiritual tourism that is ruining Tiruvannamalai. It definitely is - and for most of us it is obvious that the invasion of bikini-clad bimbos and their stoner boyfriends straight from the beaches of Goa is not sympatico with the deep religious conservatism of Tamil Nadu. But this is only a cultural invasion. It is the cherry on top of the cake: Mooji, Madhukar and their ilk are just the symptomatic rash of a much deeper malaise (the syphilisation of spirituality!) There are several convergent strands feeding into this equation. Tiru is a microcosmic melting pot of the religious and socioeconomic contradictions currently challenging Indian society. In its rush to modernise and exploit its resources, India has succumbed to the fatal embrace of neo-liberal capitalism. But at the same time the religious culture of India despises the moral and spiritual values of the economic model it is aspiring to. Unfortunately these cannot be separated. Further, this is all happening at a point where the West is having to re-examine its economic foundations because its entire system is failing. It's a race headlong into the abyss!

In the quiet of this year's sweltering heat, there has been a long pause pregnant with possibility. There have been many waves of change here and the bypass is just the latest chapter in an ongoing story. We could be on the cusp of a seismic shift. Will Indians do something different with the Western economic model in Tiruvannamalai or will we see yet another round of development and desecration? This is the last moment before modernity and consumerism finally smash through the door. Is it just a disaster movie in the making?

It's that 1914 feeling: except this time it won't be machine guns and howitzers which are coming, but drought and mass migration. As Tacitus so wryly commented: "They make a desert and call it peace!"

The love that dare not speak its name 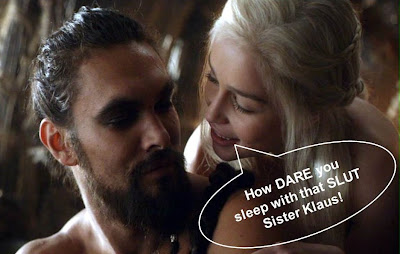 The world of Chi-Ting has been rocked by scandalous and salacious news ...

Sister Klaus and local Khal Drogo look-a-like, Shunya, have become ensnared in un amour interdit. (Shunya is famed as one of the legendary Gang of 4 who were dragged through the courts by psychotic Radha Ma loyalists for supposedly causing her to commit suicide). The Sister's former paramour, Sven, has been seen in Ramana Nagar renting his clothes while wailing and lamenting the cruel vicissitudes of fate. It had been noted of late that Shunya - despite his macho visage and raunchy mega-Enfield bike - has taken to riding around town in a dress with a suspicious hint of eyeliner and mascara. Rumours have also been circulating about him after Sister K's brief foray into the twilight world of Facebook. Apparently Shunya has been bombarding the Sister with multiple "Friend" requests. (Facebook as is self evident to every common or garden imbecile is the portal to all infamy and perversion!) Shunya's liebchen, Sexy Steffi, has been so distraught at these ugly rumours that she has immediately booked a flight from Frankfurt to confront her lover about his alarming sexual metamorphosis.
Sister Klaus, when cornered by the growing media firestorm, enigmatically said - "je ne regrette rien" - and refused to comment further ...