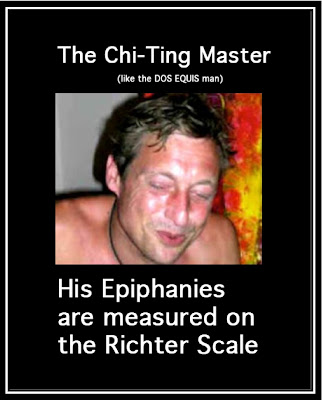 Never mind about the Fifth Dimension, the End of Time, imminent cataclysm and the deliberate extermination of the human race which is so obviously under way ... His Holiness Sri Sri SRI Swami Kevinandaji is pleased to announce the joyous advent of a new revelation:

During the annual Chi-Ting party, a newly indoctrinated Chi-Ting devotee Commander Alkar (the renegade progeny of Ashtar Command) was found writhing in ecstasy beneath an apple tree shrieking: "This is it! This is it!" Having just partaken of the DMT Pipe of Peace - offered round by our beloved Sister Klaus who deigned to leave her cave for the festive season - the Commander duly departed in his fleet of ships; saved the universe by destroying the reptilian threat once and for all; and returned for a celebratory cheese fondue and a line of coke somewhere in the region of the Swiss Alps ...

So rejoice! While the forces of materialism continue their rapacious bout of seasonal gluttony (like the parents in the manga movie Spirited Away) ... we no longer need to fear that the Mayan calendar has come and gone. What happened? Nothing or everything? And is it the same thing? All this apocalyptic frenzy is an integral part of the human psyche. It's a cliff hanger: just another story to tell ... a potboiler plot with all the momentary thrill of a Dan Brown novel and the added anti-climax of Foucault's Pendulum. A veritable tale of expectation followed by inevitable disappointment, we have been kindling our fire for millennia with the heroic myth of Gilgamesh and the likes of Odysseus with his dodgy wooden horse. Even the smiting and smoting of the Old Testament has a certain base and bestial allure. The human imagination craves entertainment and this is the biggest game in town. We at Chi-Ting may snipe from the sidelines with our own brand of Swiftian mockery but that too is part of the pageant - the colour and flavour of the fickle mob brought to riotous life with a sharply penned phrase or two!
The corridors of time converge and the clock stops ... Perhaps during this momentary and pregnant pause in the collective psyche, the battered remnants of the counter culture will make their last stand along with any other fellow passengers on the Spaced Out Enterprise. A new vista beckons. Could there be a sea change from the spectacular freefall into Corporate Nightmare World that we are currently witnessing? Maybe we will live to see some form of 60s' Star Trek socialism all trussed up in camp velcro uniforms! (Let's just call it the Neue World Order!) Has our long promised shiny new utopian world actually arrived? Or have our ET chums been indefinitely delayed at customs? Time is allegedly no more yet we still seem to be here resplendent in all our 3D glory: lumpy, grumpy, warts 'n' all! Are we destined to be forever stuck in the same 'ol game of charades - and ultimately does it matter?

The bottom line is who gives a flying fuck. The time for contemplating our navel is over ...
Just seize the day. It's bold and beautiful out there! 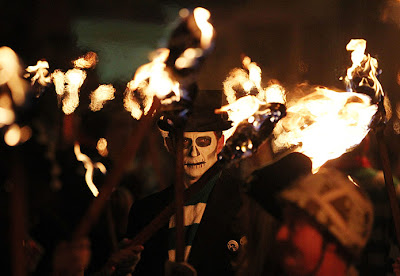