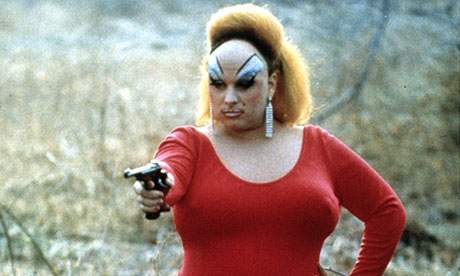 Sister Klaus is dead!
We are bereft - a true giant of the sacred art of Chi-Ting has left the stage - and we mere mortals are left to pick up the pieces and carry on. The Sister was found at 9am this morning by her cleaner, Kuti, in a deathly slumber. The Divine IT appeared strangely serene with ice blue lips and a beatific rictal smile (kind of Mona Lisa on crack!) with an electric cattle prod rammed up her errr ... well you get the picture!
Hordes of grief-stricken Klausian flagellants have gathered outside the samadhi mandir of Steve (Ibn Al Haq) Woodman at the Manna Cafe. Tempers frayed and the mob became volatile, screaming: "Steve, you're still a wanker even if you're dead!" Steve and Sister Klaus had been involved in a vicious vendetta after Steve's refusal to be the Sister's Facebook friend. He subsequently bad mouthed the Sister in an endless stream of homophobic put-downs (which was a bit rich, considering Steve's background as a London rentboy!) Steve's former partner-in-crime, Suresh, was so freaked out that he barricaded himself in and made an emergency call to his brother-in-law - Shanti Kumar of Shanti Cafe - who arrived post haste in an attempt to calm the baying crowd.
We phoned Inspector Venkatesh of the Dept of Transsexuals And Miscellaneous Perverted Orgiastic Narcissists (otherwise known as T.A.M.P.O.N.) to ask for his advice since the Sister was beginning to get a bit smelly in the midday heat. His reply was forthright and to the point: "Thank God that weirdo has left this plane of existence. This Klaus was an azuric entity of the worst kind! You must perform the Rites of Osiris so that it cannot rise from the dead. Dismember the body into 7 pieces, give them to various villages known for their occult practices, and they will consume the flesh. If there is anything left over, just bury it under the patio."
So the big question remains - who dunnit? The suspects are legion: Garbage Gal Bobbie, Kali Baba, Raging Rosie, Divakaran from the Rip Off Supermarket, Colonel Mustard or the most evil woman in town ... Charlotte Psycho-Sister. Charlotte's chief apologist, Werner von Lick-Spittle, said: "Well, if Charlotte did do it, then she was obviously divinely sanctioned by the deified Radha Ma. So that makes it OK!"
At this point we got so pissed off with Werner's sanctimonious inversion of reality, that we clubbed him around the head with a baseball bat. After he had been reduced to a bloody pulp, we decided to bury him under the patio, next to the Sister ...
Tweet