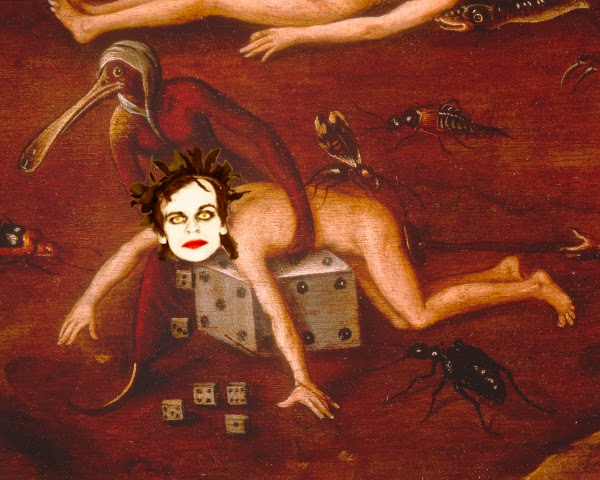 A whimsical tour of Dante's Inferno with the late great Sister Klaus ...
We always thought the Sister would end up with all those pederast Popes and naughty demons with red hot pokers. Unfortunately this might be construed as a pleasure when it's meant to be a punishment! It turns out the grumpy tranny got parked in the First Circle of Hell - Limbo - with a whole gaggle of confused, disorientated philosophers and Advaitins. And they all find their beliefs and expectations totally confounded in a weird Christian layer cake of eternal damnation!
Sister Klaus: Greetings to all my friends, foes and other plebs, still plodding along the road called Life. After my unfortunate passing away, I found myself surprisingly in Limbo: to be more correct, Dante's Limbo. That sounds a bit of a surprise right? - since none of you unbelievers, intelligent and spiritual people actually thought this place could be real or more than a mere fairytale. But here I am together with all other unbaptized pagans lacking the hope for something greater than rational minds can conceive. But that aside ... it's great here. There are green fields and a castle with seven gates to represent the seven virtues. The castle is the dwelling place of the wisest men and women of antiquity. In the long evenings there is drink and good food and we all dance the Limbo Rock [see here] til the early hours. You might recognize all those great souls of old like Plato, Aristotle, Homer, Orpheus, Electra, Penthesilea, Socrates, Lucretia, Lao Tse, Confucius, various bodhisattvas, Adi Shankara and many more ... along with the newcomers Ramakrishna, Anandamayi Ma, Nisargadatta and of course, Ramana Maharishi. Don't they look happy and blissful frolicking about like children at a birthday party?
I have to admit that I was a little shocked at first to see Ramana's gentle face in the crowd. Then it dawned on me that even though Ramana was possibly an enlightened being, he was never a Christian. Being unbaptized, he is stuck here in Limbo forever! So we were all wrong the whole bloody time and Dante Alighieri (that miserable little wretched freak from Florence) was right! That whole charade of Advaita Vedanta, liberation, awakening, nirvana - the whole satsang circus with all its teachers good, bad and worse - was just a scam. I knew this even while I was alive, but now I am in Limbo, I can see it's actually true!
I had many wonderful conversations amidst the merriment and dance, but I especially enjoyed meeting Ramana and his friend Nisargadatta Maharaj. One evening we were sipping an excellent red wine brought in from the castle and talking nonsense together (because that's what you do in Limbo when you've been wrong about Life all the while) and suddenly Ramana's face lit up. He said:" I might have been a venerated Enlightened Sage who got it all wrong, but I was right about one thing." Maharaj looked up from his newly lit beedie wondering what this could possibly be. "I always told my devotees that the Bliss experienced during deep sleep [sushupti] is the pure state. Here, there is full awareness while in the waking state [jagrat], there is total ignorance [ajnana]. This ignorance only exists in relation to the false jnana prevalent in the waking state. Really speaking, jagrat is ajnana and sushupti is prajnana [wisdom]. It is everybody's experience that nothing in the waking state compares with the Bliss and well-being derived from deep sleep when the mind and the senses are absent." I looked at him in awe and said: "So if people practise the art of sleeping and expand this until they sleep most of the time, their feeling of Bliss will continue into when they are awake. Just as a fire keeps on burning after you stop feeding it with fuel ... ignorance will have no chance to spoil the beans!" Ramana looked at me in admiration. "Exactly! Spot on!" he shouted.
But then I hesitated: "What about the world if everybody is asleep?" Ramana answered pityingly: "You know what I think of such foolishness! The world can take care of itself. It doesn't need you!" Then he frowned and mumbled: "But if you are unlucky enough to live in the US, you still have to become a Born Again Christian, vote for the Tea Party and sing Hallelujah all the time. Praise the Lord that I don't have to do that ... so embarrassing!" Ramana turned to Maharaj and asked:"Do you think that Jesus would agree with this?" Maharaj looked dumbstruck, then burst out: "Christ Almighty, why oh why did I not recognize you as 'You are That' when I had the chance? I was stuck in all that crap about being 'prior to consciousness' and it was complete bullshit!" Ramana looked at him with a benign smile. He said: "There are good wines and gorgeous women in the First Circle. There are far worse horrors here than hanging out with virtuous non-Christians and the torment of a slow internet connection. After this, there are eight more concentric zones of punishment for deliberate transgressions! In the Ninth Circle, we could join Cain, Mordred, and Judas Iscariot who are all guilty of betrayal. And at the centre is Satan and that great homunculus - Spermananda - condemned for committing the ultimate sin of personal treachery against God [and Papaji - see here] ... We were lucky not to be thrown into the very pit of Hell!"
Sister Klaus says that we don't actually know anything. Even the things we totally despise might turn out to be right - turning our whole worldview upside down. There is no universal truth! What applies to one will not apply to another. And, we are lazy. We slavishly follow the religio-cultural mindset that suits us. In a world fit for replicants, we prefer to live by any old hearsay rather than finding out for ourselves!
Posted by Chi-Ting Master at 11:46:00 AM