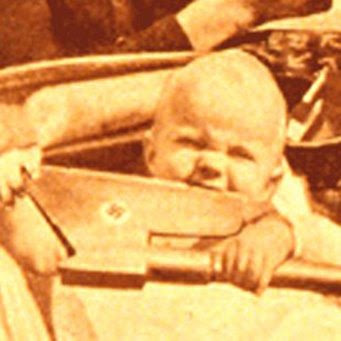 Born in the Nottinghamshire village of Little Pissup on the Trent in 1959. His Father Bert was a bit soft in the head and Mother Ada addicted to tranquilisers and gin, so little Kevinandaji grew up in a deeply deprived environment and was often seen sucking lumps of coal as sweets were not available in this austere upbringing. Kevinanda first made his mark on the world when as a child prodigy at the age of 7, he discovered pyromania and burnt down his local primary school to celebrate England's football victory over Germany in 1966. Despite a childhood filled with petty larceny, arson and random violence, Kevinandaji retained a warm and loving personality with his heart warming catch phrase, "Give us some money yer fucken hippy cunt!" As the 1970s dawned and cultural nihilism became the norm, Kevinanda had his first epiphany while watching Stanley Kubrick's A Clockwork Orange and was often seen employing an ultra violent version of Singing in the Rain on unfortunate drunks in the local underpass ... Kevinanda's first brush with fame came as a roadie and narcotic supplier for proto punk band, S&M GANG BANG, whose anthem Cheese Grater I Up! was the cause of self-mutilation across the UK ...

By the late 70s and early 80s Kevinanda had graduated to the new frontier of credit card fraud and rampant binges of shoplifting to feed his monstrous drug habit. Finally in 1985 Mr Plod in the form of law and order sentenced Kevinanda to 5 years in Pentonville Gaol ... After some extreme psychotic fits he was transferred to the Broadmoor Secure Unit for the criminally insane, where he made lifelong friends with the Kray Twins and Myra Hindley who became his surrogate auntie ... During a period in solitary confinement Kevinandaji had his first experience of samadhi and realised the Oneness of All, metamorphosing into the All Loving (well, sometimes!) Apostle of Chi-Ting ...

After his release from confinement Kevinandaji toured the world but found his gospel fell on deaf ears until finally he arrived in Tiruvannamalai in the late 90s. The rest is history!