A prison without bars 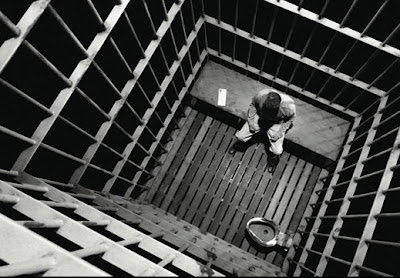 Sister Klaus in an exclusive extract from The Confessional Comments:

The Master-Devotee relationship is basically sadomasochistic: the Master gets a kick out of the suffering of the slave and the slave rejoices in the suffering to please the Master. Both seem to be happy with that and so it’s a pretty harmless game as long it is confined to sex. But cover this with a slimy sauce of spiritual abracadabra and put in some words like devotion, Advaita and Self-realisation etc and then you have the game played by Radha Ma, Saradamma, Nithyananda, Mooji, Madhukar and Karl Renz, just to name a few of the worst. This is a game where the Master is always the winner and the devotee always the loser. The devotee is never able to see this because he is “locked up” inside the play that the Master directs. He also feels safe together with the other devotees and so is unable to see the catastrophe the Master has set up.


An experience of surrender is a magic key to multiple realms of experience. Those, in innocence, who have been a victim of abuse suddenly find refuge in another world in the midst of extreme pressure. This is a spontaneous opening, which can never be revisited or recreated. Yet the temptation is to try and find it, to claim it and make it permanent. Some choose a spiritual path to do this, complete with guru-teacher, while others become lost in deviant sexual practices. Both are calculated strategies: a surrogate mechanism for claiming that which cannot be claimed. Neither is morally superior. They are an expression of love gone wrong.


Everyone has had a taste of the nectar whether it has come by meditation or masturbation. In S&M, a control drama is used to recreate a psychological breaking point. In the spiritual search, sadhana, ritual and practices are used to approach the same place of existential meltdown. The core assumption is that through compliance, something beyond reach will be attained. Someone who feels powerless tries to be powerful. In so doing they give away their power, leading to their domination, which once again confirms their powerlessness. The character profile in both cases is exactly the same. Both are junkies seeking a fix to ease the pain of the world. Each simply uses their preferred technique to try and take them home ...

The realm of the guru-disciple relationship is little different. Powered by their thirst for enlightenment, the spiritual seeker enters into an agreement with an all-powerful master who can never be disobeyed. There is only the will of the guru who exercises complete control. Within a hierarchical system of belief and righteous conduct, the devotee must totally surrender and hand over their personal power to a higher authority in exchange for liberation. Here they are lost inside an enclosure and cannot see the walls. This is a prison without bars. The devotee may come and go but their devotion or self-enquiry takes place within a closed circuit completely divorced from reality. They operate within an inner world - or the hermetically sealed walls of the ashram - where the rules of everyday life no longer apply. This too is a rigged game where the devotee is always the loser. Only the grace of the guru can bestow Self realisation: the gulf between the ego and the Self can never be bridged. The seeker with their practices is stuck on a treadmill, forever going nowhere. We're back in the land of the medieval flagellant who cannot hope to appease their vengeful Creator God!

Temporary relief can be permanently painful. Whether it's the S&M torture chamber or the guru-devotee relationship, both fuel a self-destruction where the law of diminishing returns is king. This is love within the confines of an insane vision where you wake up in a complete madhouse. Ever more bizarre storylines are needed to fill the chasm-like emotional void. In this prison of the ego, real love can never been found. The one who is superior quite literally forbids mortal physical love and so the search takes the most extreme forms. The dominatrix conjures up more and more stimulating games to reinvent what is only, a staged release. Meanwhile the guru delivers harder and harder tests. Yet any spiritual attainment is never real. This is because it emerges out of extraordinary suffering, all within an imaginary paradigm. It is totally contrived. The ever soaring heights of religious ecstasy make it seem as though the final goal is coming closer, but this is part of a simulation more akin to self-abuse. In reality the devotee is going off the deep end. It's an endless descent into oblivion ...

These themes are exquisitely explored in the 1970s' cult classic, The Night Porter, which examines the psychological condition known as Stockholm syndrome. Thirteen years after the Second World War, a Nazi SS officer named Aldorfer and a woman called Lucia reconvene their sadomasochistic love affair, which first began in a concentration camp. Crippled by the shame of his past, Aldorfer is afraid of the light and so works as a night porter. He is part of a Nazi sleeper cell, which in the political malaise of postwar Europe, continues to believe in the supremacy of the Third Reich. The cell members do their utmost to protect themselves by conducting Nuremberg-like trials on each other to discover any Holocaust survivors who might potentially expose them. Aldorfer is in love with Lucia ("light") and fearing that his fellow Nazis will murder her, he tries to hide the fact that he has met her again. It is in this context that the pair compulsively repeat their past relationship to even greater extremes. Because their emotionality is linked to fear, real love between Aldorfer and Lucia is impossible. Their sex is confined to a violent autoeroticism absent of actual physical penetration. Then the sleeper cell finds out about Lucia. Aldorfer refuses to surrender her to them, leaves his job and barricades them in his flat together. The cell's response is to cut off their means of survival, reducing the two to living without electricity and food. Starving to death, delirious, and helped by no one, while attempting to flee the couple are finally executed in the dark on a bridge, miles from home.

In this scenario the aggressor eternally dominates and the victim is perpetually hamstrung in ever more disturbing cycles of abuse. This pattern also characterises Advaita. The small self is divorced from the totality named the Self, thus it is declared flawed and inherently evil due to the presence of inborn negative tendencies known as vasanas. This denies man's interrelatedness with the universe and sets up an artificial division between the two, confining the spiritual seeker to an impoverished vision of a deviant self infinitely in need of moral correction. The devotee is always innately "wrong" in just the same way that the Christian suffers from the stain of original sin. They are now enslaved by a life of sadhana essential for their deliverance. It's a cruel and vicious trap where the self-delusion only deepens. The more the devotee does their practice, the greater their desire for liberation. The pain of separation only increases. Spurred on by their suffering and intoxicated by the virtue of their devotion/self-enquiry, the seeker starts to believe they are morally superior and on the right path. Sadhana is the opposite of what it seems. It is the gateway drug to full-blown, spiritual addiction ...

This may come as a surprise to the earnest spiritual seeker who believes that by practice and correct moral conduct, they will eventually gain personal salvation. By seeking heaven, the aspirant is actually putting themselves in hell. This is because within the Advaitic vision, powerlessness is written in from the very beginning. Given the static entities of an underself and an overself, we have a small self which must bend the knee in order to be annihilated by a big Self. Placed in opposition with an all-powerful ultimate reality, the devotee has no personal autonomy. The small self has no value: in this equation it has no worth. There is no room for an individual with its own way of being: a self that is distinct yet simultaneously indivisible from all of life. If this was the case, love would be freely available and expressed in all its forms. The perfection of the small self would be obvious and it would never require liberation since it was never truly separate. The Advaitic search is hardly non-dual. It is rooted in dualism and stems from a lack of self-love!

This contradiction is cleverly resolved at the end of the Mahabharata. Here we find that the key to Yudishthira's entry into heaven lies in honouring his wife, Draupadi (a metaphor for the self). The story goes like this ... Burdened by the weight of their past misdemeanours (i.e. the belief in original sin) Draupadi and Yudishthira's brothers, the Pandavas, fall to their deaths while making their final ascent of the Himalayan peaks. They descend into Naraka (hell) where Yudishthira himself is sent, because before entering heaven, he refuses to abandon his dog who has shown him unflinching loyalty. Yudishthira's dog is in fact his father Dharma (the correct way of seeing, and acting in, the world) and Yudishthira decides to remain with his family in hell. There he discovers it is preferable to live where the good people are - rather than in heaven - which he finds is full of his mortal enemies. (Joined by Yudishthira whose dharma is impeccable, the 'bad' self plagued by original sin is now 'good'). Suddenly Indra and Krishna appear telling Yudishthira that this has been a final test. By deciding to stay in hell with Draupadi, he has atoned for sacrificing her honour during the infamous dice game. (Duryodhana loaded the dice against Yudishthira who lost all his wealth and his entire kingdom. As a result he had no choice but to sell his wife and brothers into servitude). Yudishthira has penetrated the final illusion and now he can wake up. Indra and Krishna tell him that Draupadi and the Pandavas are already in heaven ... The self is always without flaw!

Here it is revealed that both awakening and enlightenment are illusory objects attained within an inverted framework of hierarchical power. Escape from suffering - be it temporary (awakening) or permanent (enlightenment) - is born out of suffering. Freedom is rooted in bondage. Each is its own mirror image. Meanwhile the notion of a mutually exclusive, powerless self stays intact. The event of enlightenment is therefore an egoic psychodrama without substance; completely devoid of any reality. There is no such thing as enlightenment and the self has never "not" been free!

In conclusion, we echo the words of that infamous 18th century libertine and free thinker, Giacomo Cassanova: "Man is free, but he is only free if he believes himself to be … The only system I have had ... is that of letting myself go where the blowing wind took me."