The curse of Neo Advaita ... 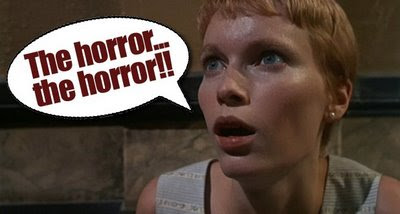 Shopping for salvation
It could be you. YOU could be the lottery winner, Neo Advaita style ... Truth as a fast-food outlet, the latest soap product. Neo Advaita has branded and packaged enlightenment as a cure-all for a generation caught up in an endless quest for instant gratification. This is the post-modern democratisation of Self realisation, a sophisticated seduction of the Capitalist ego, which promises the ultimate conquest: personal dominion of the spiritual!
Neo Advaita is not Advaita Vedanta and it is not the teachings of Ramana Maharshi either. Ramana merely used the language of Vedanta to explain his experience of Truth and said Be As You Are. Vedanta stops at mentally affirming the existence of the Self whereas Ramana counselled to go beyond the mind for Self realisation.
Who are you? Well, you'll never find out if you listen to this bunch of morons! The Neo Advaita trademarks are: Anyone can be enlightened (Apparently!) ... The "I" is still there after enlightenment (You can say that again with this lot!) ... You don't need a guru, you can do it yourself (So why do we need any of these idiots then?) ... Nothing exists and there's no sadhana: Nothing To Do (Except attend all their satsangs and give them lots of adulation and cash for their multiple DVDs, books, photographs and meditation cushions!)

Just for the record, Ramana taught that realising the Self is predestined and a matter of Grace. He said the "I" is totally gone after enlightenment and that the presence of an enlightened being is essential, until the Self is attained. And Ramana endorsed all paths, stating that sadhana depends on the individual.
Neo Advaita has hijacked and emasculated Ramana's Self realisation, exploiting it for its own ends. It has taken his Do Nothing instruction, which Ramana said was only for the advanced and perverted it to mean that absolutely NO sadhana is necessary. Anyone can "have" enlightenment NOW! No hassle, no effort: realisation before you've even got there.
This is a shallow, consumerist interpretation scraped from the retina of Ramana's teaching, which sells you abstract notions of enlightenment as the real deal: like buying on credit and never having to pay. It is the description of enlightenment minus the genuine article, an enticing theoretical product where body is divorced from mind. All you get is talk and pseudo-awakenings become the new benchmark. Saying it, replaces being it. Soft words and the language of love masquerade as the real thing. Understanding realisation is suddenly the accomplishment. Salvation served up on a slab: consume and you're enlightened!
The upshot is that anything goes if you can argue it. In the absence of visceral experience, the slightest tremor is an Awakening. And with the arbitary use of any free-floating concept, even Ramana can be castigated as a fake. Like a 1000-headed hydra, one guru pops up only to be shouted down by another who shouts even louder (As Mr Heinz so sagely put it: 57 varieties of Mind Fuck Soup!) This is why this Paradigm of Paradise is so jumbled and confused. It's a hybrid monster: Presence, Being In The Moment, Neti Neti and mental deconstruction to the nth degree, all in the name of satsang!
This ugly assault on the Citadel of Consciousness is led by the bastard progeny of The Godfather; U.G. Krishnamurti (Remember this is the man who described all spiritual experiences as dogshit and the guru's grace as secondhand vomit!) U.G.'s Blitzkrieg boys are Tony Parsons, Karl Renz and Jed McKenna (is he really Adyashanti's evil twin?)
Tony Parsons is the ringmaster of this circus and its most cogent spokesman. He is the prime mover in the European New Wave along with Karl Renz - both with their respective brands of bullshit humour to flesh things out. Tony has made a career out of a mythical Walk in the Park, which he defines as his Awakening experience. This didn't stop him from hanging out for years with the original Rajneesh (not his counterfeit copy!) Tony's clique indulge in a game of partisan one-upmanship. They are all desperate to join the so-called Awakening Club and dissenting voices are condemned to the gulag of "You don't get it, you're so dualist!" In this world, everyone including Ramana is deemed guilty of dualist speech and action. The logic behind this resembles the Marxist mindset-gone-mad: paranoia and cries of revisionism are fine-tuned with asinine comments, in what amounts to a kangaroo-court of self-appointed Non Dual Word Police. Tony's mantra is: "Vasanas, what vasanas? There is only this!" A superfluous wave of the hands then illustrates this great mystery (NOT!) All we are left with is the vacuous nature of Tony's smug bonhomie and his tired old jokes ...
The next member of this triumvirate is American enfant terrible, Jed McKenna, who doesn't actually exist (But then, nor does Sri Sri SRI Kevinandaji!) This fictional entity is the King of Smartass Logic and Neo Advaitin non-concepts, blurted out in a continuous stream of self-congratulatory invective. His idée fixe is a clumsy and trite analysis of the novel Moby Dick, where the whale represents the ego and Ahab is the mind's attempt to annihilate itself. Jed is a Master of folksy Mid West patter. The catch is, it's all just words.
Last up is Karl Renz. He's from the Academy of Mental Gymnastics, denying everything much like those Neti Neti hooligans of Old School Hinduism. Here comes the mind-wank of perpetually refuting and ridiculing absolutely anything somebody says, without any of the enlightenment. Poor Karl, he's still trapped in the mind: negation is his only friend!
Neo Advaita is a Massacre of the Innocents. It is a cynical ploy totally devoid of humility. Without the need for sadhana or any prior qualification for enlightenment, anyone can be a guru. Tickling the vanity and satisfying the illusion that it is "us" who are in control of our awakening, this horror story is an existential meltdown created by none other than, THE EGO! It is designed by the spiritually and emotionally lost, its mouthpieces are avaricious Devils in Disguise (See the movie Rosemary's Baby for a concise analogy!)
We leave you with a quote from the ultimate Chi-Ting publication of all time, The Bible, Matthew 7: 15-21: "Watch out for false prophets. They come to you in sheep's clothing but inwardly they are ferocious wolves ... "